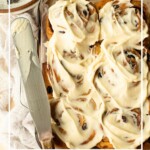 These soft, gooey raisin cinnamon rolls have all the flavor of cinnamon raisin bread, but with an even better texture. With the combination of fluffy, raisin-specked dough, buttery cinnamon and brown sugar filling, and thick schmear of cream cheese frosting, they couldn't be a more irresistible breakfast option. To make your morning easier, these homemade sweet rolls can even be prepped a day in advance!

If you ask me, sweet rolls of any sort - whether filled with cinnamon, chocolate, or other mix-ins - are as good as breakfast gets. The bread-to-filling ratio is spot-on, the texture is soft and doughy, and the frosting is (quite literally) the icing on the cake. And while I love a classic cinnamon roll, I'd be remiss not to share this variation, made with plump, juicy raisins for even more flavor. Think of them as a mashup of cinnamon raisin bread and hot cross buns, but better!

Tips for making these rolls

If you're new to baking with yeast, start by reviewing my tips for success with homemade sweet rolls. They cover many of the basics that will help you with this cinnamon raisin roll recipe. Beyond that, here are a few pointers specific to these rolls:

Everything you'll need for these homemade cinnamon raisin rolls is pictured in the photo below, with specific amounts in the recipe card at the bottom of this post. Let's discuss a few details before we dig into the how-to.

How to make raisin cinnamon rolls

If you've made cinnamon rolls from scratch before, this is essentially the same process. The main difference is that we'll be kneading raisins into the dough, which is easy!

Step one - Rehydrate the raisins: Using a small bowl, submerge the raisins in the orange juice and let them soak while you work on prepping the other components of the bread dough.

Step two - Scald the milk by heating it to 180ºF - you can do this on the stove or in the microwave. I recommend gauging the temperature with an instant-read kitchen thermometer. Then, add cubed butter and allow it to melt. Once melted, whisk the mixture to smooth it out, and let it cool to 120º-130ºF while you work on step three.

Temperature is important when working with yeast. If your liquids are too hot, they'll kill the yeast. If they're too cold though, it'll take a lot longer for the yeast to do its job. 120º-130º is the perfect sweet spot for instant yeast.

Step five - Make the dough. Combine the milk mixture and raisin mixture with the dry ingredients, using a rubber spatula to incorporate the flour into the liquids. You can then start kneading the dough by hand until it fully comes together.

Step six - Knead. Turn the dough out onto a lightly-floured surface (you can use a sheet of parchment or a smooth-surface countertop) and knead for 10-15 minutes, until it's soft, smooth, and elastic. You may need to incorporate up to an additional 4 ¼ ounces (or 1 cup) of bread flour in the process. Do this gradually, and only if you find that the dough is sticking to your hands or your kneading surface.

Step seven - Shape and rest. Shape the dough into a smooth ball and transfer it to a lightly-oiled, medium-size ball, flipping it over once to coat both sides in oil. Cover it with plastic wrap and let it rest at room temperature for 30-60 minutes. It may not rise significantly during this time, but you should still aim for a longer resting period if your kitchen is on the cool side.

Step one - Make the cinnamon-sugar: In a small bowl, whisk together brown sugar, granulated sugar, and cinnamon until well-combined. This will become your cinnamon roll filling.

Step two - Roll the dough out. Place the dough on a lightly-floured surface and use a rolling pin to shape it into a 12"x16" rectangle, with one of the 12" sides facing you. If you're having trouble getting it to size, it can help to lift the dough from one end and let it hang a bit as you go, as well as gently stretch the corners apart to keep the edges roughly squared off.

Rub the softened butter over the surface of the dough, and then sprinkle the cinnamon sugar filling evenly over top, leaving about an inch of the buttered dough uncovered on the side furthest away from you.

Step three - Roll and slice: Beginning with the side closest to you, roll the dough into a tight log. Once you reach the end, roll the log so that the seam is at the bottom. Use a sharp knife or a piece of floss to slice the log into twelve equal portions. It helps to slice it in half first, slice each side in half once more, and then slice each quarter into thirds.

Step four - Let rise: Grease a 9"x13" baking dish with butter or cooking spray. Carefully transfer the individual cinnamon rolls to the baking dish in a 3x4 pattern. It's best to situate each roll so that the outer seam is touching the edge of the dish or another roll.

Cover the dish with plastic wrap and let the rolls rise until they've expanded enough to nearly fill the bottom surface (a few small gaps are fine). Optionally, you can do this second rise in the refrigerator overnight, and let them sit out for 1-2 hours in the morning to finish rising as needed.

Step five - Glaze and bake: Preheat your oven to 350ºF. Just before baking, brush the rolls with melted butter. Bake them for approximately 25 minutes, until the tops are beginning to turn golden brown.

If you have an instant-read thermometer, you'll know your cinnamon rolls are done when the interior temperature of the bread in the very middle of the pan reaches 190ºF. Always be cautious of overbaking; it's the worst thing you can do if you want soft, gooey rolls!

Step one - Make the cream cheese frosting. In a medium mixing bowl, beat together the softened cream cheese and butter with an electric mixer until smooth and creamy. Add the confectioner's sugar, vanilla extract, and a heavy pinch of salt, and beat in until smooth once again.

Step two - Frost: Use a spatula or knife to spread the frosting over the rolls once they've been out of the oven for about 15 minutes. Serve your homemade raisin cinnamon rolls while they're warm and doughy, of course!

Cinnamon rolls are always best when freshly-baked. This recipe is no exception, but that doesn't mean they won't still taste good a few days later!

If you don't plan on eating all of the rolls the day they're baked, I would suggest leaving the extras unfrosted. You can store the rolls directly in the dish they're baked in and cover them with plastic wrap. They'll be best if left at room temperature and should keep for up to 3 days. Store the frosting in a separate airtight container in the refrigerator.

Individual rolls can be reheated in the microwave for approximately 30 seconds, or until warm.

Can I knead this dough in a stand mixer?

If preferred, you can whisk the dry ingredients in a stand mixer, and then mix in the milk and raisin mixtures (step 5 of the dough recipe) using the paddle attachment. Switch to the dough hook attachment to knead.

Can I make these as overnight cinnamon rolls?

Yes! The second rise for these cinnamon rolls can be performed in the refrigerator overnight. Just make sure you let them finish rising for 1-2 hours at room temperature the following morning before baking them.

How can I speed up the rising time for cinnamon rolls?

Dough rises best at a temperature around 75º-80ºF, which mean your cinnamon rolls will rise faster in the summer, when your kitchen is naturally warmer. During the cooler months of the year, the simplest thing you can do is find a draft-free spot for your dough and be a little extra patient with it. However, Taste of Home has a few other tricks you can employ to manufacture the ideal dough-rising environment.

If you're looking for something sweet to serve for breakfast or brunch, here are a few of my other favorite options!

Have you made this recipe?

If so, I'd love to hear your feedback; you can leave a rating and review in the comments section below!

Help spread the word by sharing this post on your favorite social media channel! If you happen to snap a photo of something you've baked, be sure to share it on Instagram and tag me (@brighteyedbaker) so I can give you a shoutout! 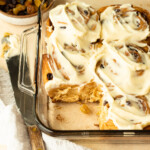 These soft, gooey raisin cinnamon rolls have all the flavor of cinnamon raisin bread, but with an even better texture. A thick swirl of tangy-sweet cream cheese frosting on top makes them all the more irresistible. To make your morning easier, these homemade sweet rolls can even be prepped for breakfast a day in advance!