These mini chocolate chip biscotti taste like chocolate chip cookies, but crunchier! They're dipped in chocolate for an added layer of sweetness, and taste amazing dunked in a hot cup of coffee.

Generally, I have a rule that all cookies MUST be soft and chewy, but there's one definite exception: biscotti. I love a good biscotti, and a good biscotti is a crunchy biscotti. Ideally, it's crunchy enough to dunk into freshly-brewed coffee without losing its structural integrity, but not so dry and crunchy that it isn't enjoyable on its own. These chocolate chip biscotti meet those requirements to a tee. They're perfectly crisp, but have just a slight amount of chew in the center for a little bit more of a cookie-like vibe. So if you're into dunking chocolate chip cookies, let's talk!

What we Americans call biscotti (they're known as Cantucci in Italy) are twice-baked Italian cookies, traditionally made with almonds. They're typically baked as logs of dough, sliced into individual cookies, and then baked a second time. This double bake dries them out and makes them crunchy - perfect for dunking in coffee, milk, or if you're into it, wine (not that I'd recommend it with this recipe!). Today the ingredients vary; some include a fat like butter or oil while others don't, and the mix-ins can be anything from nuts to fruits to chocolate. They're also often dipped in chocolate after being baked, and if you know me, you'd know that I am *very* on board with this idea.

How biscotti get their shape

In order for biscotti to get their classic shape, they have to first be baked as a single portion of dough, and then sliced while they're still soft enough to cut into, but firm enough to hold their shape. To do this, you'll make the dough and form it into two separate rectangular or oval-like shapes on a baking sheet. We'll bake these biscotti for 30 minutes, at which time the dough will be golden, but definitely not crunchy or firm. Let them cool briefly, and then slice at an angle into individual pieces.

Next, you'll turn the biscotti onto one of their cut sides and spread them out on the baking sheet in preparation for the second bake.

Once the biscotti have cooled for about 30 minutes, you'll put them back in the oven at a slightly lower temperature (to prevent burning) and bake them for another 12-15 minutes per side. This will dry them out just enough to make them crunchy, without turning them into flavorless rocks. They'll be fairly firm to the touch when you take them out of the oven, but will get crunchier as they cool.

Once you've fully baked and cooled your biscotti, you can dip them in chocolate! Technically this step is optional, but highly recommended. Carefully melt your chocolate in the microwave for 15-30 second increments (chocolate seizes and burns easily!) and then dip each biscotti about halfway into the chocolate. Give the chocolate about an hour or so to set, or put the biscotti in the refrigerator for a few minutes to speed up this process.

Since the double-bake dries them out, biscotti have a longer shelf life than most baked goods, and keep well without refrigeration. I recommend placing them in an airtight container or zip-top bag and storing at room temperature. They should keep for at least 2 weeks.

Are these biscotti dairy-free?

While these chocolate chip biscotti are technically not dairy-free, those with lactose sensitivities can safely eat them due to the fact that they're made with ghee instead of butter. If you are lactose intolerant, you should also use dairy-free chocolate (which is what I did here!). I highly recommend Lily's Sweets chocolate chips and dark chocolate baking bar.

Looking for more? Here are a few of my other favorite biscotti recipes!

Strawberry Almond Biscotti - These biscotti are extra-almondy thanks to a combination of sliced almonds & almond extract, and flavored with tangy bits of freeze-dried strawberries. They're also gluten-free, dairy-free, and refined sugar-free!

Salted Caramel and Candied Pecan Biscotti - Candied pecans are mixed into this biscotti dough, and the finished cookies are drizzled with homemade salted caramel. They're hands down some of the best biscotti I've ever made.

Vanilla Bean Biscotti - If you're looking for something simple and classic, try these Vanilla Bean Biscotti. They've got 3 types of vanilla in them, and even though you could absolutely dip them in chocolate to dress them up, they're just as good served plain. 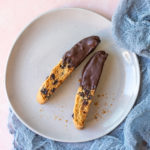 These mini Chocolate Chip Biscotti taste like chocolate chip cookies, but crunchier! They're dipped in chocolate for an added layer of sweetness, and taste amazing dunked in a hot cup of coffee.