I feel like I should be making all the pumpkin spice things right now and pumping out the fall vibes, but instead I'm talking about the strawberry almond biscotti that I was supposed to post about 2 months ago.... Oops. Regardless, if good things are worth the wait, good biscotti are definitely worth the wait, and I'm allllll about this biscotti. They're extra almondy because we're being generous with the almond extract here, and just sweet enough without crossing the line into dessert-for-breakfast (not that I could possibly judge). The freeze-dried strawberries add a little bit of fruity tang to the mix, and thennnn we add a hefty sprinkling of raw sugar to finish them off with a sweet crunch. Also, if you couldn't tell from this pie and these cupcakes, I'm having a bit of a moment with coconut sugar these days, so I totally used it here - plus a little maple syrup - to make these refined-sugar free. Not sayin' it's health food, but I feel like the little swaps still make a difference! 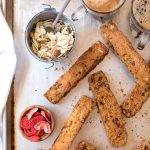 Toasty biscotti with a nutty almond flavor and bits of tangy freeze-dried strawberries, finished with a sprinkling of raw sugar for a sweet crunch.

In a large bowl, whisk together the flour, baking powder, and salt.

In the bowl of a stand mixer fitted with the paddle attachment, or using a large bowl and handheld electic beater, cream together the coconut oil and coconut sugar. Add the eggs and beat in, one at a time, until well-incorporated. Beat in the milk, almond extract, and maple syrup.

Add the dry ingredients to the wet and fold in by hand until mostly incorporated. Add the chopped almonds and freeze-dried strawberries and fold in just until all ingredients are evenly combined.

Transfer the batter to the prepared pan and spread out to fill pan in a flat, even layer. The batter will be sticky; it helps to fold the parchment overhang over the batter and then press down with hands or a large, flat spatula. Sprinkle demerera sugar generously over batter.

Bake biscotti in preheat oven for 30 minutes. Remove biscotti from oven and reduce temperature to 325ºF. Meanwhile, allow to cool for about 20 minutes before slicing. Using a sharp knife held at an angle, carefully slice into 12 individual pieces.

Transfer parchment and biscotti to a baking sheet and spread biscotti out on cut sides. Bake for 40 minutes, and then flip biscotti to opposite sides and bake another 35-40 minutes, until golden brown and quite firm to the touch. Remove from oven and allow to cool completely on baking tray.

Store in an airtight container at room temperature.

*I've used both almond milk and canned coconut milk in this recipe with success.