Annnnd just like that, we finally have a pie recipe on the blog. It only took me... oh... 6 YEARS.

How do you write a food blog and not share a single pie recipe for 6 years? Easy. You make tartlets and galettes, cobblers with pie crust toppings, and even pie crust rolls, but you do everything possible to avoid your tiny little fear of making a classic pie crust that has to be rolled out, transferred to a pie plate, latticed, and crimped. I kid you not, these things give me anxiety.

But in the name of summer (and rhubarb and peaches), I caved. And you know what? I stand by my prior opinion that pie crusts are too high-maintenance and I'd rather just make a (rhubarb) galette - or at least a pie with a graham cracker crust. There, I said it. But if you just happen to be one of those people who has perfected the art of the pie crust - or were born with a natural gift for all things classic home baking - I've got a pie for you to make!

I was honestly a little skeptical of the flavor combo happening here, but I was on a random rosemary kick last week and decided to take a chance with it and I've gotta say, it totally worked. The filling is tangy-sweet thanks to the rhubarb-peach combo, which works so so well with the rosemary whipped cream. The crust is buttery like any good pie crust should be (and also gluten-free!), and the entire pie is free of refined sugar because that's kinda the way I roll these days. Final consensus? Pie-making is a skill that I have yet to totally master, but eating it makes it pretty worth it, and don't skip the whipped cream. :D

Many of the products you see in the photos were provided by OXO to help make this post possible. 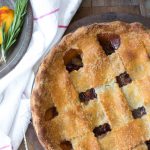 A classic pie with a buttery gluten-free crust and tangy-sweet rhubarb-peach filling, topped with a fluffy cloud of rosemary whipped cream. Refined sugar-free!

¾ teaspoon xantham gum (omit if your flour already contains it)

Combine the heavy cream and rosemary in a small saucepan. Cover and heat over medium until small bubbles begin to form on the surface and steam forms. Let steam for one minute and then remove from heat and refrigerate until cold, letting rosemary steep.

Just before serving pie, remove rosemary sprigs and transfer cream to the bowl of a stand mixer fitted with the whip attachment (or use a large bowl and handheld electric mixer). Beat on medium-high speed until thickened. Add sugar and vanilla extract and continue to beat just until cream holds its shape, being careful not to overbeat.

In a large bowl, whisk together the flour, coconut sugar, salt, xantham gum (if using), baking powder, and rosemary. Toss in the butter to coat, and then flatten each chunk between your fingers. Add the sour cream and fold in just enough to moisten the dry ingredients; the dough should still be somewhat shaggy. Finish kneading the dough together by hand just until cohesive, adding ice water a teaspoon at a time if needed.

Divide dough in half. Turn each half out onto a piece of plastic wrap, press into a disc, and wrap. Refrigerate for 30 minutes.

Remove one portion of dough from the refrigerator and place on a large, floured sheet of parchment. Dust surface of dough with flour and roll out into a rectangle about 1" thick, adding extra flour if it begins to stick. Fold the dough onto itself like you would a letter. Dust again with flour and repeat the rolling and folding process twice more. Finally, roll the dough out into a 12-inch round and carefully transfer to pie plate. Refrigerate while prepping remaining dough and filling, at least 30 minutes.

Repeat the same rolling and folding process with the second portion of dough, and then roll into a 12-inch circle and cut into even strips (I did six strips, 2" wide). Use parchment to transfer to a baking sheet and refrigerate while prepping filling and egg wash.

In a large bowl, toss together the peaches, rhubarb, sugar, arrowroot starch, vanilla extract and sea salt until thoroughly combined. Set aside.

In a small bowl, whisk together the egg white and water.

Remove pie crust from refrigerator and pour filling into crust. Carefully arrange strips of dough accross the top in a lattice design. Trim the strips to the edge of the pie plate, and then fold the bottom crust overhang over the top of the lattice, press lightly to seal, and crimp edges. Brush dough with egg wash and sprinkle with demerara sugar.

Bake pie in preheated oven for 15 minutes, and then reduce heat to 350ºF and bake another 50-60 minutes, until top is golden-brown and filling is bubbling. Tent with foil if crust begins to brown too quickly.

Remove from oven and allow to cool for at least a few hours before serving. Serve with rosemary whipped cream. Cover any leftovers with plastic wrap or aluminum foil and store in the refrigerator.

*I used 2 tablespoons of sugar, but if you like a sweeter whipped cream, you can increase it to 3 tablespoons.

**My typical go-to gluten-free flour is Pamela's All-Purpose, but I used Cup4Cup Pie Crust Mix in this recipe, which I liked as well.

***I used 3 ¼ ounces (⅔ cup) coconut sugar for the filling, which gives you a pretty tangy flavor. If you want a sweeter filling, increase the sugar to 5 ounces (1 cup).