This moist, gluten-free Pumpkin Bundt Cake is laced with a Cream Cheese Filling and topped with an irresistible Brown Sugar Icing glaze. It’s a festive fall dessert that makes a perfect alternative to pumpkin pie for Thanksgiving!

Quick Note: This is an updated version of a post that originally appeared on Bright-Eyed Baker in 2012. Along with new text & photos, I've made a few modifications/improvements to the recipe. Two of these changes are particularly significant: 1) The cake is now written to be made gluten-free, but regular all-purpose flour will also still work in this recipe. 2) I've doubled the amount of glaze on top for better coverage. If you loved the original, I have no doubt you'll love it even more now!

How amazing are bundt cakes? They're like the laid-back sibling of layer cakes - every bit as good but so much simpler to make. And don't get me wrong, I love a pretty layer cake, but you have to have TIME for that. A bundt cake, on the other hand, is something you can whip up on a Friday night and still have time to relax and watch a movie afterwards. I don't know about you, but that's my vibe.

Here's all the things there are to love about this Pumpkin Bundt Cake:

This particular bundt cake has been a fan favorite since I originally shared it - so much so that I knew I needed to try a gluten-free version. As it turns out, using gluten-free all-purpose flour in place of regular all-purpose works beautifully, and the cake turns out just as soft & moist as I remembered it. It's a perfectly tender, lightly spiced pumpkin cake, swirled with a just-sweet-enough cream cheese filling. To top it all off, we glaze it with an amaaaazing cinnamon-spiced Brown Sugar Icing. Trust me when I say that doubling the icing on this cake was the best decision I made; if you're anything like us you'll be spooning up every last bit on your plate because it's that good.

Is this the perfect fall cake? Yes. Could you make this instead of pie or cheesecake for Thanksgiving? Definitely. Could you even splurge a little and call this Thanksgiving breakfast? I won't judge. ;)

And in case you're looking for more Thanksgiving Day inspiration...

These gluten-free Pumpkin Scones are another guaranteed winner for Thanksgiving breakfast. I've made them three times this fall and I honestly might not be done.

Every cozy fall morning needs a hot cup of coffee, but a homemade Pumpkin Spice Latte is even better!

These Sweet Potato Rolls are one of my favorite bread recipes of all time and perfect for Thanksgiving dinner! They're insanely soft and fluffy. 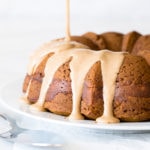 This moist, gluten-free Pumpkin Bundt Cake is laced with a Cream Cheese Filling and topped with an irresistible Brown Sugar Icing glaze. It’s a festive fall dessert that makes a perfect alternative to pumpkin pie for Thanksgiving!

and love it! It makes storage super easy and keeps the bundt cake looking its best.