Right off the bat I'd just like to say that these aren't the prettiest muffins you're ever gonna find, but they taste so good that I decided to just not care. Could they be a little more domed like a perfect bakery-style muffin? Yeah. Could the streusel crumbs on top be a little bit bigger? Probably. Does any of this affect the experience of eating these muffins? Absolutely not. So here they are, a little less than photogenic but probably in the ranks with some of the best-tasting muffins I've ever had. Here's the deal: although these are technically muffins due to their shape, they really do taste more like coffeecake, which is something I can't entirely explain other than that the soft & fluffy texture plus the ever so slight hint of sour cream in the crumb screams coffeecake more than muffin to me in the best way possible. In fact, these almost remind me of a suuuper fluffy cinnamon-swirl bread, except for the fact that there's no yeast in them and they don't require any slicing before eating (or copious amounts of time to make). All that being said, the real message here is that these muffins are killer. ALSO, the batter tastes like sugar cookies, so there's really no going wrong. 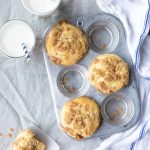 Super soft and fluffy muffins laced with a swirl of cinnamon-sugar and topped with a sweet cinnamon streusel. If you've ever wished coffeecake came in grab-and-go format, these muffins are for you!

Add sugars, cinnamon, and salt and whisk until incorporated.

Fold in flour until combined and use hands to clump into a ball. Set aside while prepping remaining components.

In a small bowl, whisk together granulated sugar, brown sugar, and cinnamon. Set aside.

Preheat oven to 400ºF and grease a 12-cup muffin tin with oil or nonstick spray.

In a medium bowl, whisk together the flour, baking powder, salt, and baking soda.

In the bowl of a stand mixer fitted with the paddle attachment, or using a large bowl and handheld electric mixer, cream together the butter and sugar until light and fluffy.

Beat in the eggs one at a time until smoothly incorporated, wiping down the bowl and beater as needed. Beat in the sour cream and vanilla extract.

Beginning and ending with the dry ingredients, add ⅓ of the dry mixture to the butter/sugar mixture, alternating with ½ of the buttermilk, mixing on low speed and continuing until all parts have been added and are mostly incorporated. Finish folding together by hand just until evenly combined.

Fill prepared muffin cups about halfway with batter, making sure to cover the bottom of each tin completely. Divide cinnamon-swirl mixture evenly between each muffin cup, and top with remaining batter to cover cinnamon completely. Swirl batter with a toothpick as best as possible (it will be thick). Smooth tops of muffins with your fingertip.

Use hands to break streusel mixture into clumps and scatter over prepared muffins.

Bake muffins in preheat oven for 7 minutes. Reduce heat to 350ºF and bake another 13-15 minutes, until a toothpick inserted into the center comes out clean or with just a few moist crumbs.

Allow muffins to cool to room temperature before removing from pan. Muffins are best served fresh.