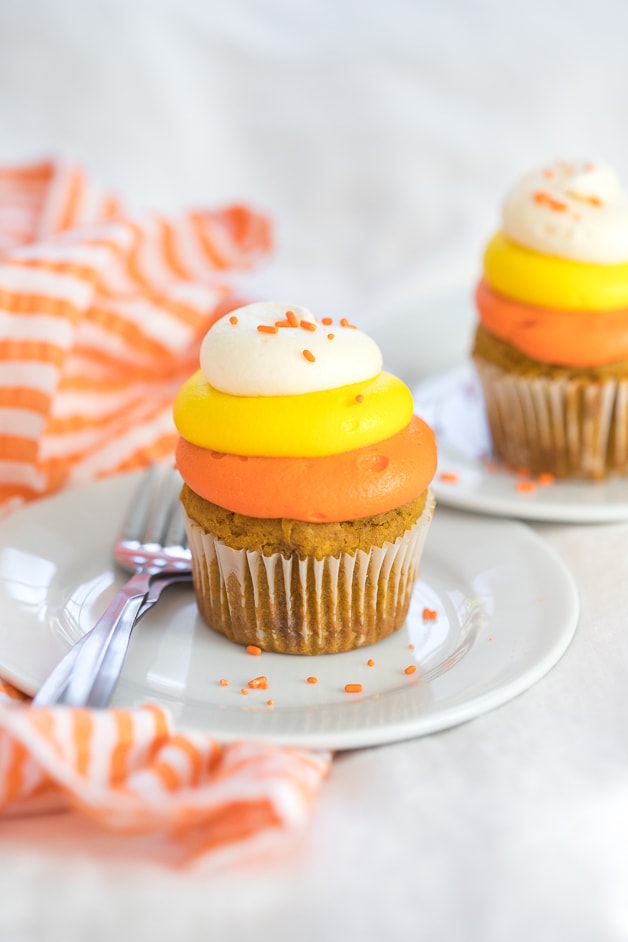 A few weeks ago I asked everyone on Instagram what kind of Halloween recipe I should post on the blog and literally everybody said “something with pumpkin”. It’s completely unspecific, but I kinda love it because it means you guys are obsessed with all things pumpkin as much as me. 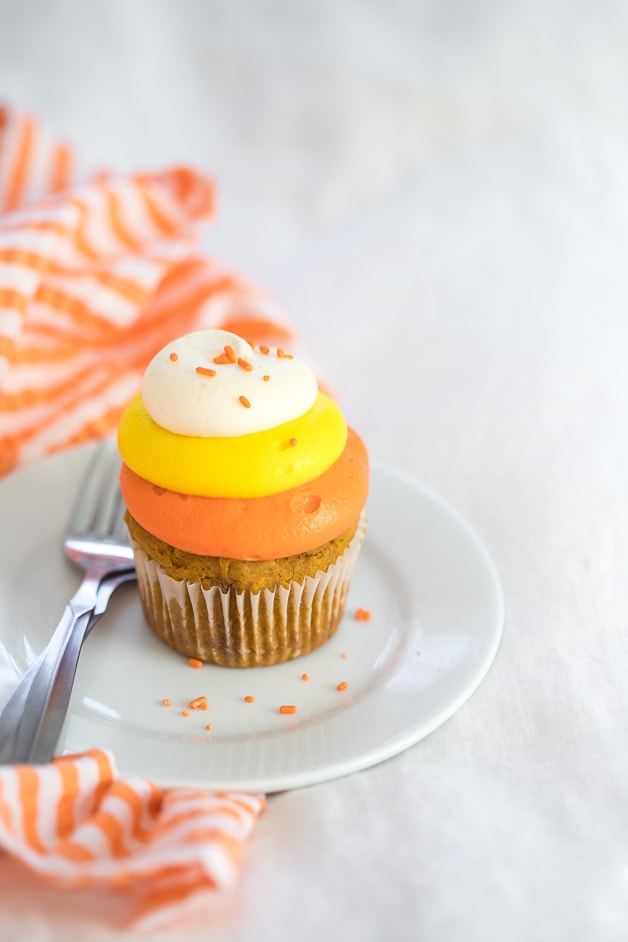 With that in mind, I woke up Sunday morning and made what was an impressively fast decision to create these gluten-free pumpkin cupcakes. Typically I suck at making quick decisions, but when it comes to pumpkin, cream cheese is a natural next step in my mind, so the idea came together easily. And when you add a candy corn-swirled frosting?! Def winning the cute factor. 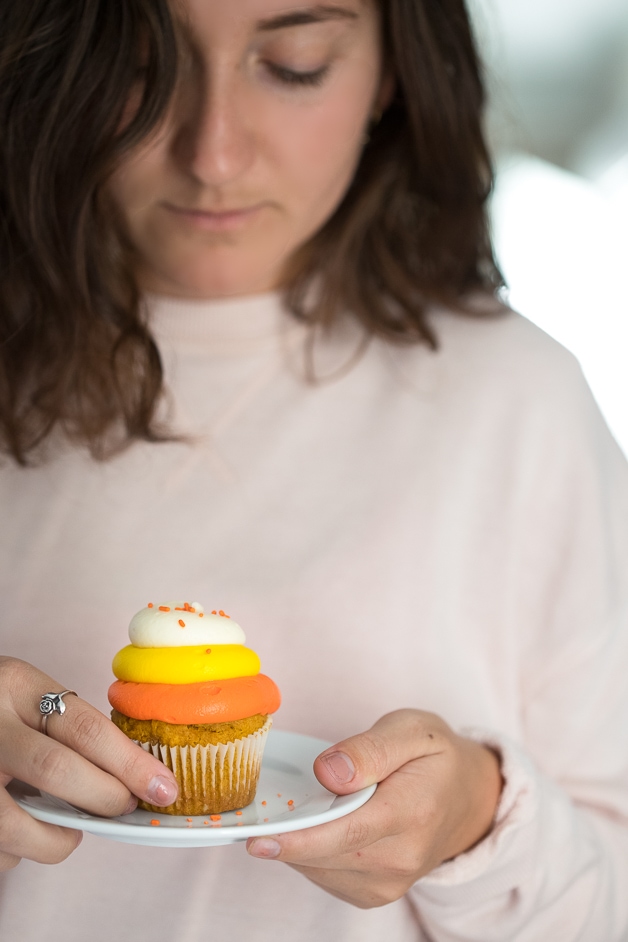 I’m not the first person to come up with the idea of making candy corn cupcakes, but a lot of recipes just use white cake and vanilla frosting, which is all fine and dandy but not very seasonal. A lot of them also use a cake mix, and I’m a big believer in doing things from scratch when possible. I love that this recipe uses from-scratch, gluten-free pumpkin cupcakes because a) the orange cupcakes really add to the candy corn aesthetic, b) pumpkin is *very* seasonal, and c) it gives us an excuse to use cream cheese frosting (my fave). 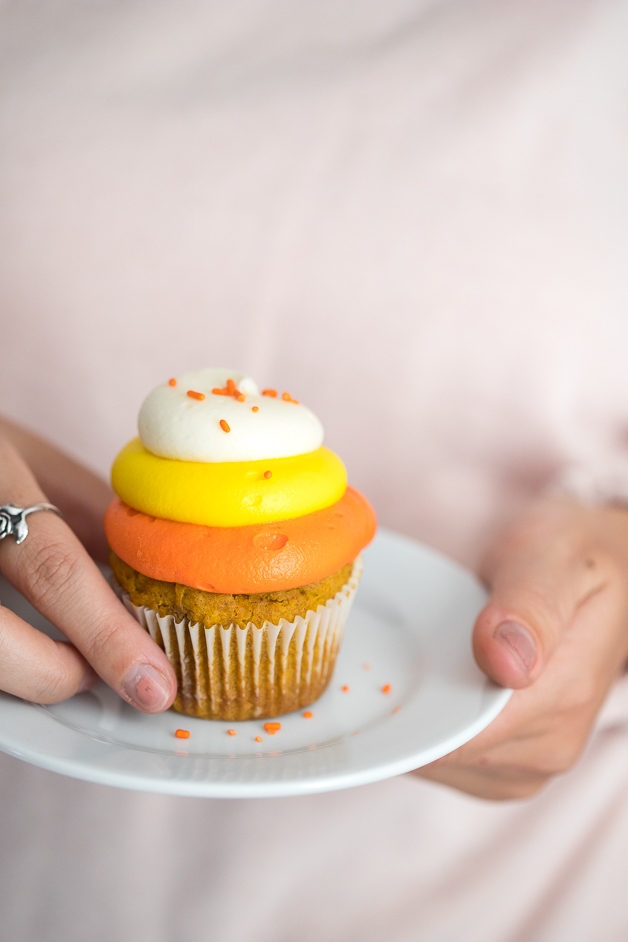 So, this one’s for everyone who requested “something pumpkin”, everyone who wants a cute Halloween dessert to make, and everyone like me who just needs a good recipe for gluten-free pumpkin cupcakes in their repertoire/life. They check all the boxes – super soft and moist, perfectly spiced with fall flavors, and topped with my favorite buttery & tangy cream cheese frosting. I love summer, but I guesssss fall can come around if it means I have an excuse to make more desserts like this. 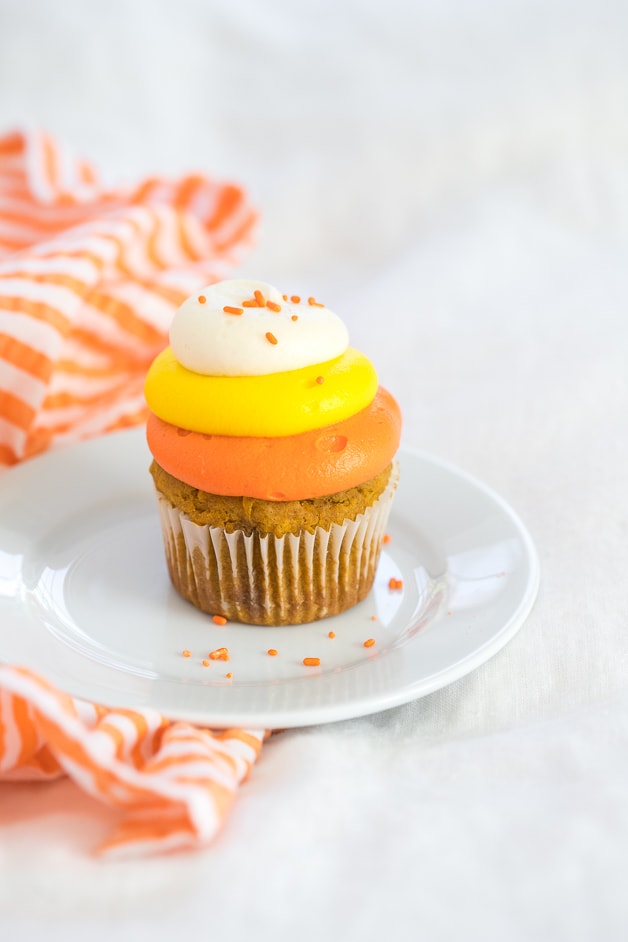 My Pumpkin Spice Fluffernutter Cookie Sandwiches have DIY marshmallow creme in the center.

These Pumpkin Cheesecake Shooters are no-bake and super easy to whip up for a quick Halloween dessert! 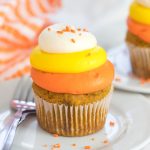 In a second bowl, whisk together the pumpkin, cream, melted butter, eggs, and vanilla extract until smooth.

Add the wet ingredients to the dry and fold in just until evenly incorporated.

Divide batter evenly between prepared muffin cups and gently smooth out tops with a small spatula or your fingertips.

Bake cupcakes in preheated oven for 18-22 minutes, or until a toothpick inserted into the center of one of the cupcakes comes out clean.

Allow to cool in pan for 10-15 minutes before transferring to a wire rack to cool completely.

In the bowl of a stand mixer fitted with the paddle attachment, cream together the cream cheese and butter on medium-high speed until smoothly combined.

Switching to the wire whip attachment, add the confectioner’s sugar and beat in, starting at lowest speed and increasing as it’s incorporated. Add vanilla extract and salt and beat on medium-high until smooth and fluffy.

Divide frosting into 3 portions, each slightly smaller than the last. Use gel coloring to tint the largest portion orange and the second-largest yellow, leaving the smallest portion white.

Using a piping bag fitted with a large round tip**, pipe a layer of orange frosting onto each cupcake, followed by a layer of yellow frosting, and finally a layer of white frosting. Sprinkle tops with colored jimmies if desired. Serve.

Store any leftovers in an airtight container. For short term storage they can be stored at room temperature during cooler weather, but for longer storage or warmer weather they should be kept in the refrigerator.

*Half-n-half or whole milk should work fine as well