You all probably know how I feel about pie crusts, because I've definitely said it about a million times before. But in case I didn't think my less-than-perfect pie crust skills were being challenged enough, I've now ventured into the territory of gluten-free crusts, which is a whole ordeal of its own. I honestly went into this not knowing whether I'd wind up with a perfectly flaky crust or just a chewy knockoff, but I'm happy to report that flaky, buttery, gluten-free galettes are actually JUST as easy to make as if they were loaded with gluten. <--- Hallelujah Now obviously a good crust alone does not make a galette, so let's talk about this filling, shall we? My friend's words were "it tastes like fall", which is pretty much the best thing anyone could have said and *exactly* what I was going for when I was planning the flavors here.  There's a whole lotta fresh pears (like, we're piling them on), a mix of warm chai spices, and a little coconut sugar to sweeten it up. Coupled with the crust, which has a bit of buckwheat flour thrown in for some nutty flavor, it's pretty much fall in food form - sooo warm and cozy ♡. And let's not forget the whole whip cream situation happening here... honey-cardamom whipped cream? BEST IDEA EVER. Somehow it rounds all the flavors out perfectly and adds just the right amount of sweetness with a little bit of spice. I really can't think of any moment when adding a dollop of whipped cream isn't a good idea, but lemme just say, this time it's non-negotiable. Whipped cream: not optional. 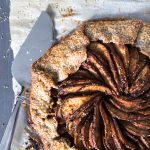 A blend of chai spices add a warm, cozy flavor to this simple pear galette with a flaky & buttery buckwheat crust.

In a bowl, whisk together the gluten-free all-purpose flour, buckwheat flour, coconut sugar, and salt.

Using the large-hole side on a box grater, grate the butter into the mixture and toss until coated in flour and dispersed. Add 3 ounces (6 tablespoons) ice water and work in gently with hands, beginning to bring dough together in a ball. Add remaining 1-2 tablespoons ice water as needed until the dough forms a ball that is neither dry nor sticky, being careful not to overwork.

Wrap in plastic wrap and refrigerate for about 45 minutes. Meanwhile, prepare filling.

In a large bowl, toss together the sliced pears, arrowroot starch, lemon juice, spices, and salt until pears are evenly coated in mixture.

Lightly flour a sheet of parchment sized to fit a standard baking sheet.

Flour surface of dough lightly and roll out on parchment to a 12″ round, adding more flour as needed to prevent sticking. Dust surface with 1 tablespoon gluten-free flour and arrange pear slices concentrically on top of dough, overlapping pieces slightly and leaving a 2” border around the outside edge.

Lift galette with  parchment and transfer to a baking sheet. Refrigerate for about 10 minutes. Meanwhile, preheat oven to 400ºF.

Just before baking, remove galette from refrigerator and carefully fold and pleat edges over outer border of filling. Brush crust with cream and sprinkle entire galette generously with demerara sugar.

Bake galette in preheated oven for 25-30 minutes, until crust is golden, tenting with foil if necessary during baking to prevent excess browning.

Galette is best served freshly baked, either warm or at room temperature. Serve with honey-cardamom whipped cream if desired.

In the bowl of a stand mixer fitted with the wire whip attachment (or using a bowl and handheld electric mixer), beat the cream on medium-high speed until thickened. Add honey and cardamom and continue to beat just until cream holds its shape.