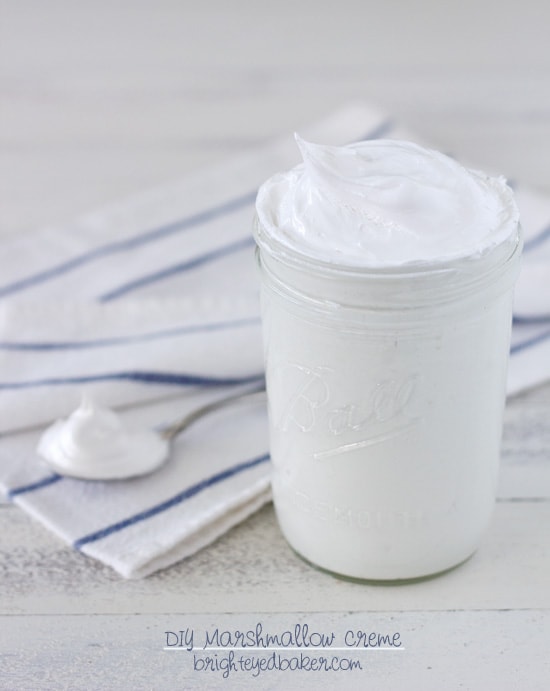 A few month ago I made homemade marshmallows for the first time. They were fluffy and airy and incredibly easy to make. I used them in some awesome s'mores ice cream sandwiches and was totally smitten with the fact that I could make my own marshmallows from now on. Fast forward to now and I've found my new marshmallow-y obsession: Homemade Marshmallow Creme.

It's smooth, glossy, creamy, and fluffy, and I love it. Just like marshmallows, Marshmallow Creme is a breeze to make. In fact, I think making Marshmallow Creme might even be easier (which is a little dangerous when you think about it). Whip up some egg whites, make a sugar syrup, combine the two, and whip, whip, whip your way to marshmallow heaven. That's basically the gist of it, for reals. :) And since marshmallow creme doesn't have to "set" like marshmallows do, you can be spooning this stuff into your mouth straight away - I mean, ahem, using it in a recipe. Of course there's a recipe coming up - I always have an ulterior motive. ;) I think I should mention that I happen to know a marshmallow LOVER who claimed full rights on the marshmallow creme-covered beater, spatula, and spoon once I was done making this stuff. I'm pretty sure that means it gets a huge stamp of approval.

This homemade Marshmallow Cream is incredibly easy to make. Plus, it's so perfectly thick, fluffy, creamy, and glossy, you'll wonder why you ever bothered buying it from the store!