Home » Recipes » Candy and Chocolates » Confession #96: This is how my mind works… Chocolate-Dipped Peppermint Marshmallows

I try, but I just can’t. And one reason why is because my mind always tries to weigh the possibilities, pros, and cons of everything. 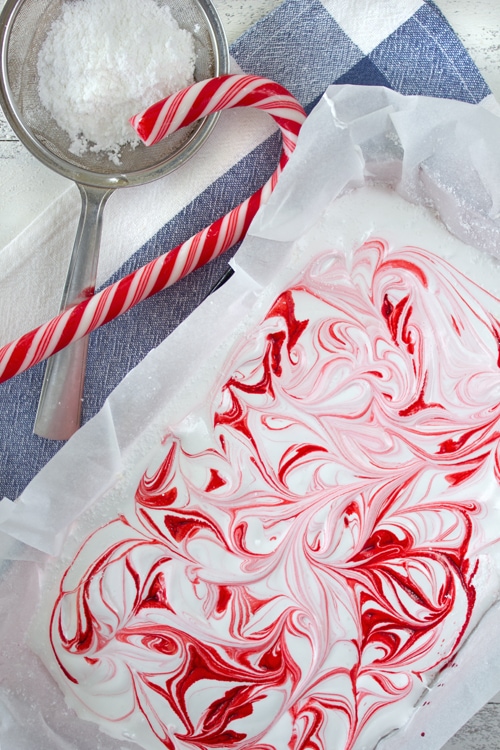 Case in point: The other day, I needed to stop by the store on my way home to buy peppermint candy for these marshmallows. It took some debating on my part to even decide whether I needed it. “Well I have soft peppermints at home, but made crunchy would be better… and something that has more red in it…” Those were seriously the thoughts going through my head. Anyway, I decided to get some from the store, which led to me trying to decide where to get it from. “Do I go to the dollar store? It might be cheaper there. But then again, it might not be the kind I want…” So finally I picked a store, got there, and spent at least 5 minutes looking at the different kinds of peppermint candies (of which there are about 9,234,239 during the holidays) until I finally picked the kind I wanted. 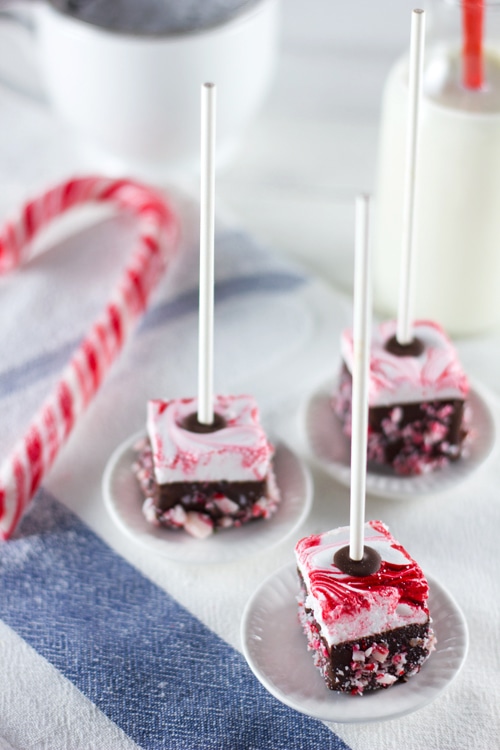 Things moved pretty quickly from there, until I got to the checkout and tried to see if I had enough change for the candy. Of course I couldn’t manage to get anything but pennies and dimes out of my wallet when I was really looking for the quarters. Eventually, I just resigned to using a credit card to pay for $1 something worth of candy canes. Whoopee.

But you know what makes all of that time worth it? When you get something good out of it, like these Chocolate-Dipped Peppermint Marshmallows. Fluffiest-ever marshmallows, laced with peppermint extract, swirly red on top and dipped into dark chocolate (aka the best stuff ever). I love these because they’re so perfect for the season and because I can eat them and not feel too guilty about it. Marshmallows are practically all air, right? Haha :) 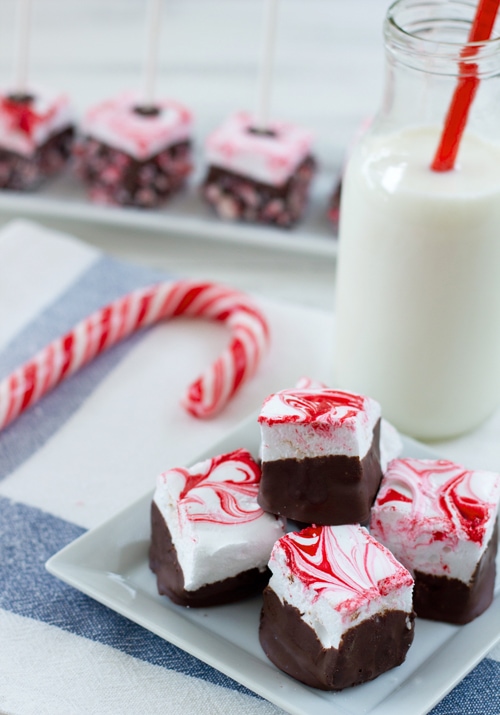 You know what these would go amazingly with? A homemade Peppermint Mocha. I would suggest that you go make both ASAP, and then enjoy the warmth indoors with your blissfully delicious chocolate peppermint treats. You can thank me later. ;)

Soft and fluffy Peppermint Marshmallows with a candy-cane swirl, dipped in dark chocolate. There are two ways to make them for a doubly-festive holiday dessert!

*Boil more water than needed for the recipe, as the volume of water will decrease as it boils. Measure the ¾ cup needed for the recipe once the water has been brought to a boil. This is also a good time to test your candy thermometer. Fit it to the saucepan you use to boil the water and boil for about 10 minutes. The thermometer should reach boiling temperature (based on your location) by the end of the 10 minutes. If the thermometer reading is incorrect, adjust for the discrepancy when cooking the syrup for the marshmallows. I learned the hard way that this is important!

**If you can find peppermint candy cane sprinkles, I think they would be easier to use than crushing your own peppermint candy. If you do choose to use crushed peppermint, try to avoid crushing the candy too much, or it will get powdery and look messy on the marshmallows. Also, be aware that the peppermint may start to look sticky by the second day.

**I definitely recommend getting a candy thermometer to make marshmallows, but you can also test the syrup by seeing if it has reached the soft ball stage. If you spoon a bit of syrup into a bowl of very cold water, you should be able to clump it into a ball with your fingers, but if you take the ball out of the water, it should string out again.