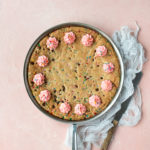 This giant funfetti chocolate chip cookie is baked in a skillet and decorated with swirls of cream cheese frosting. It's an easy, fun alternative to birthday cake that's just as festive! Plus, it makes for an extra thick, dense, and chewy cookie - never a bad thing.

Add sliced butter to a 12" oven-safe skillet and place in oven for a few minutes while preheating, just long enough for butter to melt. Once melted, remove from oven, whisk briefly, and transfer to a large mixing bowl. Grease skillet lightly with cooking spray to prep for baking.

Add the brown sugar and granulated sugar to the melted butter and whisk until smoothly combined and slightly paler in color. Add the eggs and egg yolk one at a time, beating each in until fully incorporated. Whisk in the vanilla and almond extract.

Add the dry ingredients to the wet and fold in with a spatula until mostly incorporated, with a few streaks of flour remaining. Add the chocolate chips and sprinkles and fold in just until all ingredients are evenly combined.

Press the cookie dough evenly into the prepared skillet. Bake for 25-30 minutes, until the surface is golden and puffed up, and no longer looks wet or glossy. Remove from heat and transfer to a wire rack. Let cool to room temperature before frosting.

In the bowl of a stand mixer fitted with the paddle attachment, beat together the butter and cream cheese on medium speed until smoothly combined, wiping down the bowl and beater as needed.

Add the confectioner's sugar and beat in on low speed until fully incorporated, again scraping down bowl and beater as needed. Add the whipping cream, vanilla extract, almond extract, and salt, and mix in just until the frosting is smooth. Add the gel food coloring (if using)  in small amounts, mixing in by hand with a spatula until you're happy with the color.

Pipe frosting onto cookie cake as desired; I used a large star tip. Garnish with sprinkles and serve.

*Unsalted or salted butter will work. I used one stick of each for a balanced flavor.

** To quickly bring eggs to room temperature, you can place whole eggs in a bowl of warm water and let sit for about 5 minutes before using.