Yes; I am indeed Irish, and also a bit crazy. Although there are probably quite a few reasons that I’m crazy, the current reason is that I spent a couple hours trying to decide what to make for St. Patrick’s day, and I ended up going with my first idea, a recipe I saw about 2 weeks previously. Figures!

For St. Patrick’s Day this year, I was torn between making something green and making something that’s actually Irish. I settled with going the “traditional Irish” route because most of the “green” things I thought of were sweets, and I didn’t really have any reason to make something sweet. So, what foods are considered Irish? Here’s what I came up with: corned beef (not my thing), anything with Bailey’s, Guiness, or Kerrygold butter/cheese (none of which I have on hand), and various kinds of breads (potato bread, barm brack, and of course, soda bread).

Before you say, “Aww, geez, you went with soda bread? Could you be any more typical?”, hear me out. Not all soda bread is created equally. In fact, as I learned in my go-to bread book, “The Complete Book of Bread & Bread Machines

I must confess, what I knew of soda bread before a couple weeks ago was just about nil. I had only ever heard of white soda bread made with currants, and I was under the impression that it was a dry, boring bread. In fact, I really wondered why anyone ever bothered to make it. However, I’m now a Soda Bread convert. Since I’ve made this Wheaten Soda Bread and also sampled a sweeter version of soda bread (white, with currants, and not at all dry), I’ve realized the tasty possibilities Soda Bread holds. 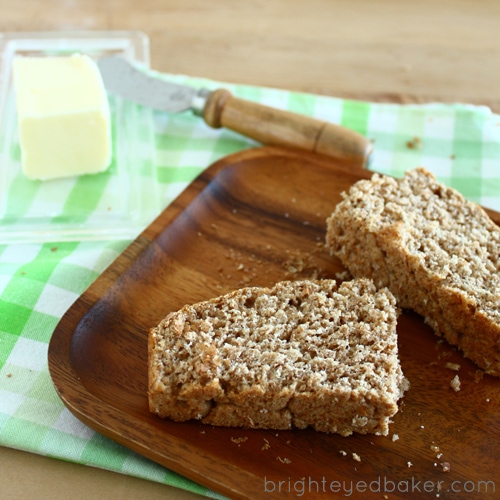 What I love about this Wheaten Soda Bread is the fact that it’s 100% whole wheat (pretty healthy!) and yet not at all dry or overly dense. It has a slightly sweet flavor but is still more of a dinner/lunch bread (along the lines of beer bread, but not as sweet). The whole wheat and bran in it provides a nice amount of texture, but the bread still maintains a soft quality. Before baking, the top is brushed with some melted butter, and I decided to sprinkle on some bran for a pretty finish. (Truth be told, I spilled extra bran on the counter and didn’t want to waste it, but I think the pretty finish is a better excuse.) And, sure enough, it keeps well for as long as it takes to be eaten (which probably won’t be long!). Overall… this is not your typical whole wheat sandwich bread… it’s better!

P.S. Did you know? The buttermilk in Irish Soda Bread is used to give acid to the baking soda, making the bread rise by releasing carbon dioxide into the dough. 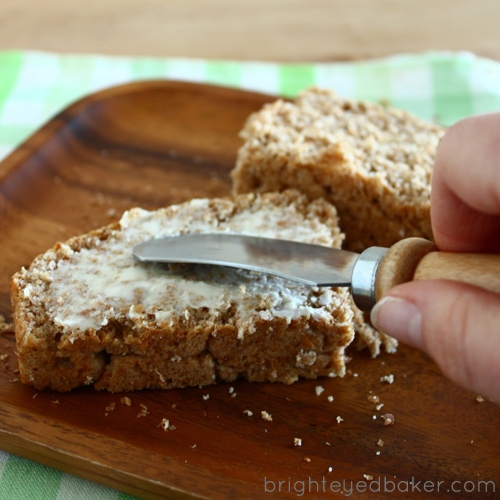 If you don’t have buttermilk on hand, you can use milk and vinegar or milk and lemon juice as a substitute. For more information, see my Buttermilk Substitute page.