I’m back with more Italy pictures!! I hope this excites you, because if it does, that means we must be kindred spirits who love traveling and making a kajillion lists of all the places we want to visit someday, right?! In all honesty, my phone is filled with lists of places to travel all over California, plus Seattle, Washington, Chicago, Portland, Utah, Cabo, London, Tahiti… it goes on and on. There mayyyy also be a folder in my phone with screenshots of places on my travel wish-list. I’m not planning on missing out on anything. 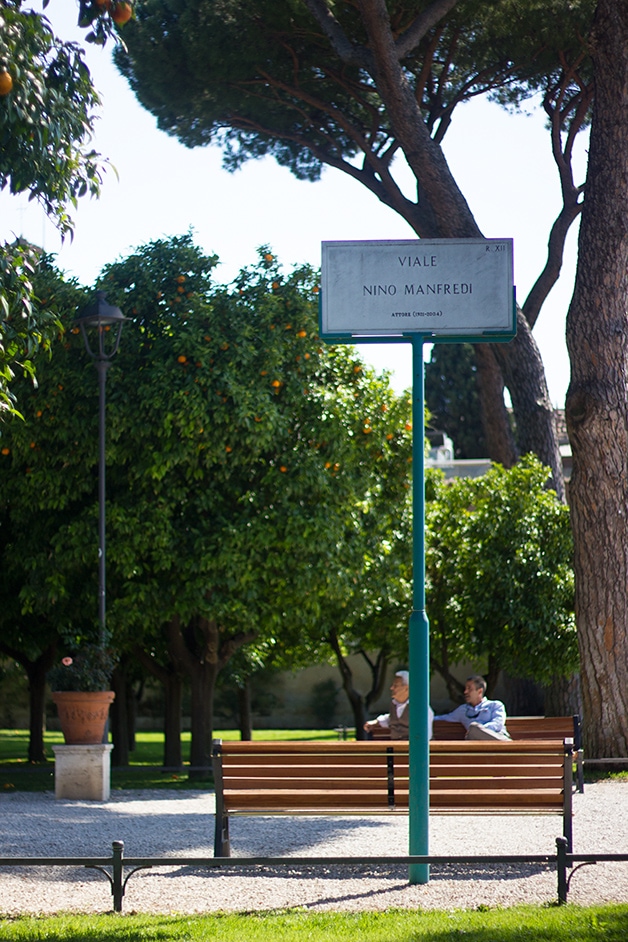 Anyhow, a few days back I shared a ton of stuff about visiting Venice, and now we’re moving down to Pisa and Rome with more pictures, more food, and more nonstop talking on my part. We were just in Pisa for the day to visit the Leaning Tower, but we did make a couple food stops, and the tower is – in my opinion – well worth the visit. Just seeing such an iconic sight in real life is sort of mesmerizing to me, and really experiencing it (climbing all the way up to the top, seeing the giant bell, and getting to overlook the entire city below) is one of those things that just blows you away and stays in your memories forever. If you visit Italy and you can somehow squeeze a stop at Pisa into your trip, definitely do it! Food-wise, we had a good margherita pizza at Brasserie La Loggia, and I was really pumped to find an American-style coffeeshop called Filter that actually makes iced coffees AND has flavored syrups!! From what I’ve seen, the latter is pretty rare in Europe, so for somebody who’s used to drinking iced caramel lattés and the like every day, it was SO nice to get a little treat of something I’d been missing for a while. 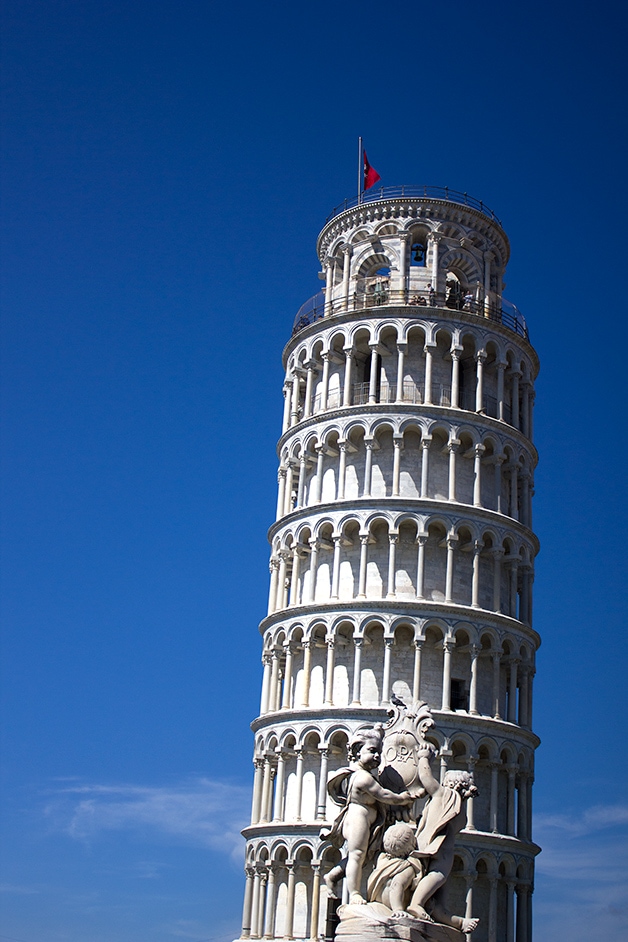 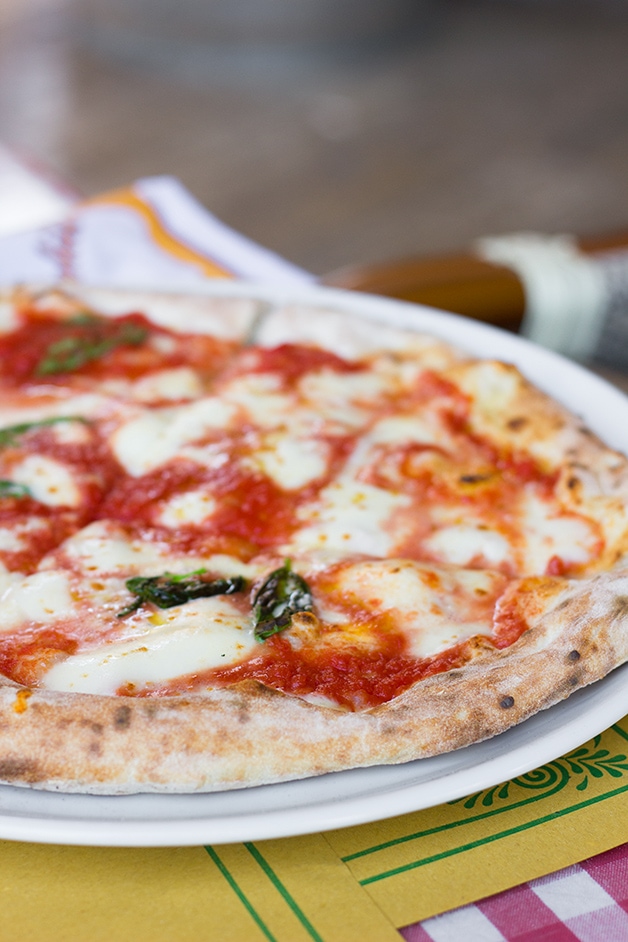 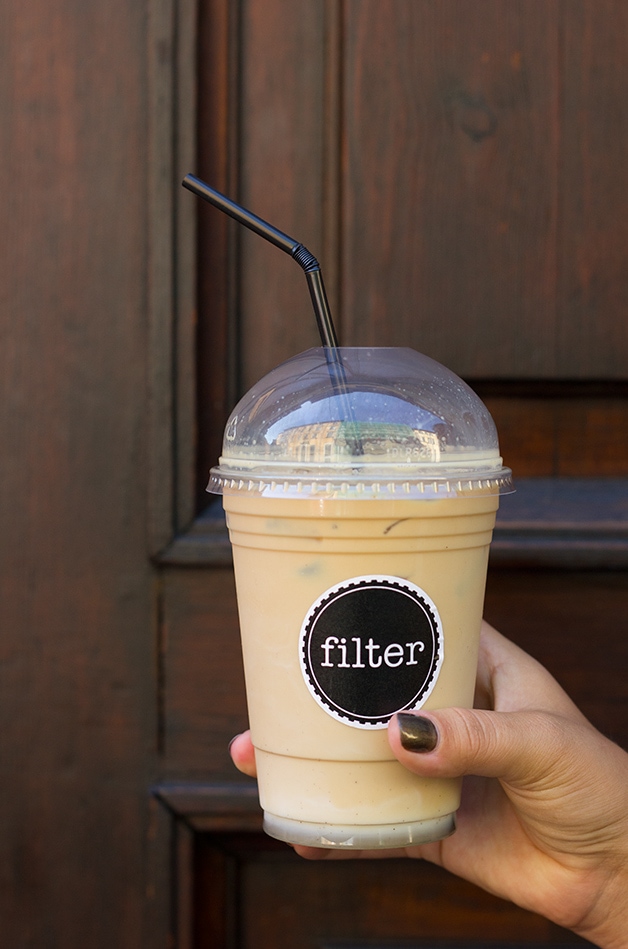 And then there was Roma (← please imagine me saying that with the perfect Italian accent I don’t have, yeah?)… 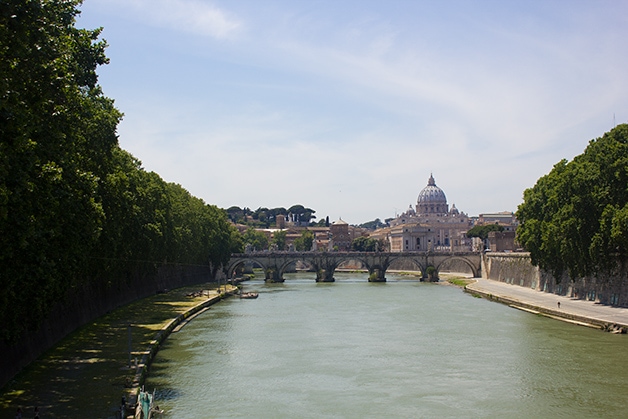 I really don’t think I’ve ever seen a place filled with so much history before in my life, and that’s what I found absolutely amazing about Rome. We could looked out the window of our hotel and literally see the Colosseum right across the street, or walk along the roads and see old ruins being excavated below. It’s like walking through a constant time warp and it just doesn’t stop being mind-boggling.

Places we went that I would definitely recommend:

The Colosseum – This one probably goes without saying, but you can’t possibly visit Rome and not see the Colosseum. The outside views alone are impressive of course, but it’s another thing entirely to walk inside and get a feel for all of the history held within those walls. 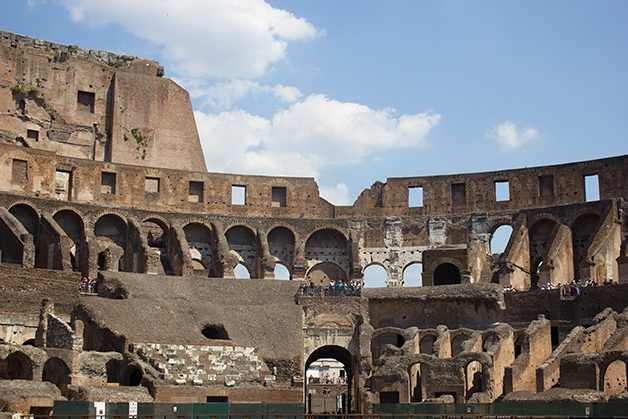 Palatine Hill and the Roman Forum – To be perfectly honest, I’m not exactly sure where Palatine Hill begins and the Roman Forum ends, but walking through both may have been my favorite part about Rome. It’s like walking through an ancient city – technically I suppose that’s literally what Rome is, but because it’s this huge area in the center of Rome where so many of the ruins still exist, the experience is completely unique. Plus, the views are gorgeous and the area as a whole feels really serene. You could easily just lose yourself exploring for hours and not get bored. 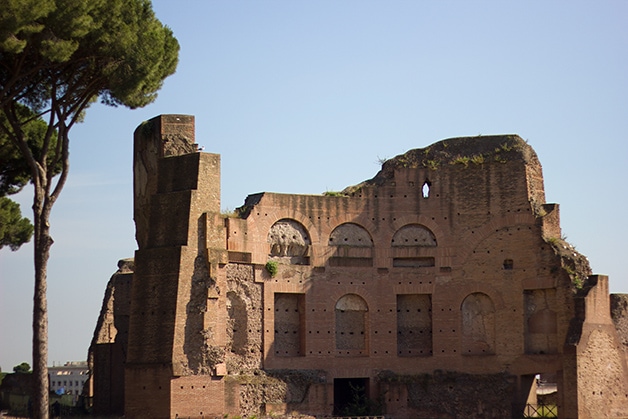 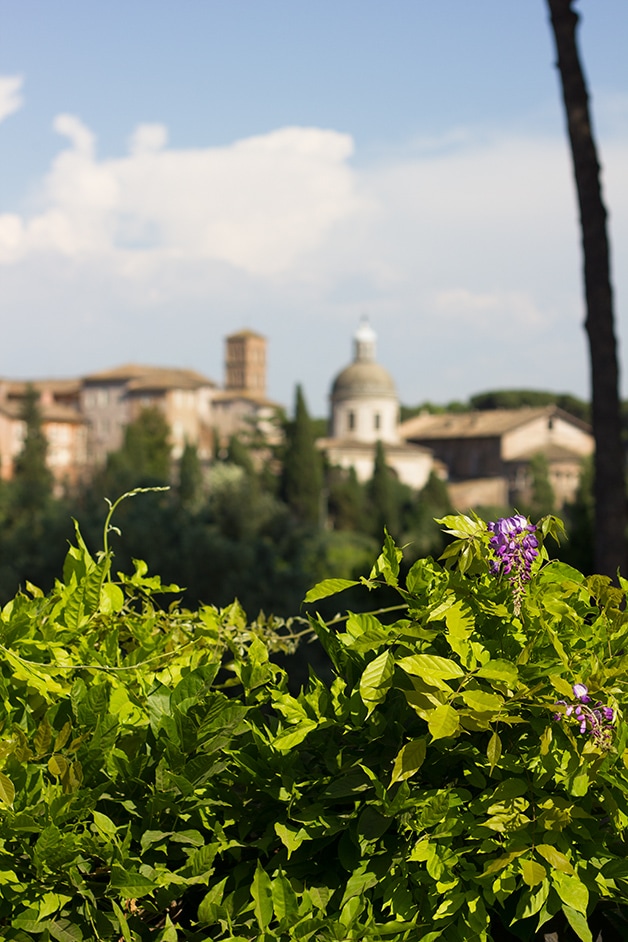 Pantheon – I’ll be the first to admit that I can only visit so many churches before they all begin to blend together in my head, but the Pantheon is without a doubt one of the most majestic buildings I’ve ever seen and well worth the visit. 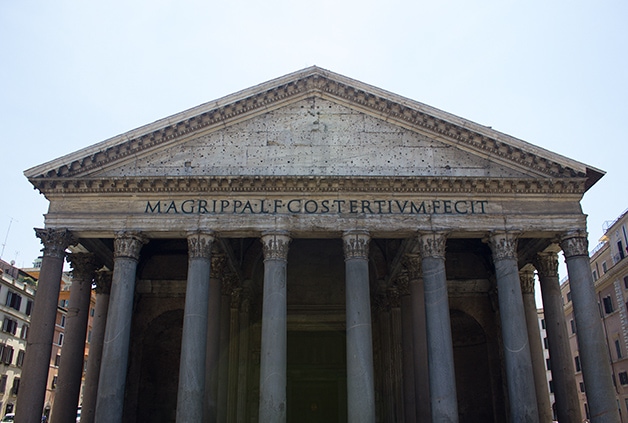 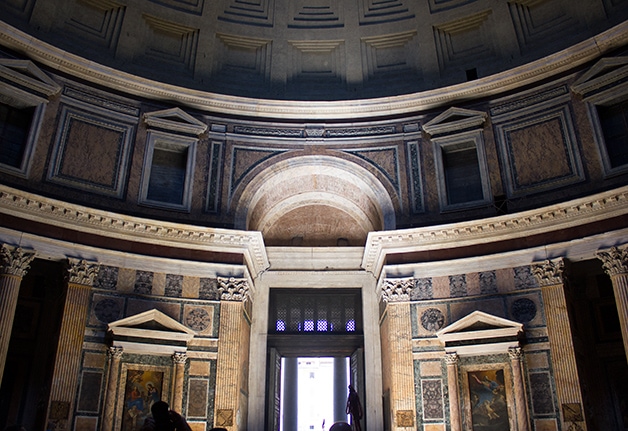 Santa Maria in Aracoeli – This is one of the other churches I specifically remember a year later; it’s at the top of a huge set of steps so the view is pretty amazing on its own, but the inside is also massive and pretty magnificent. 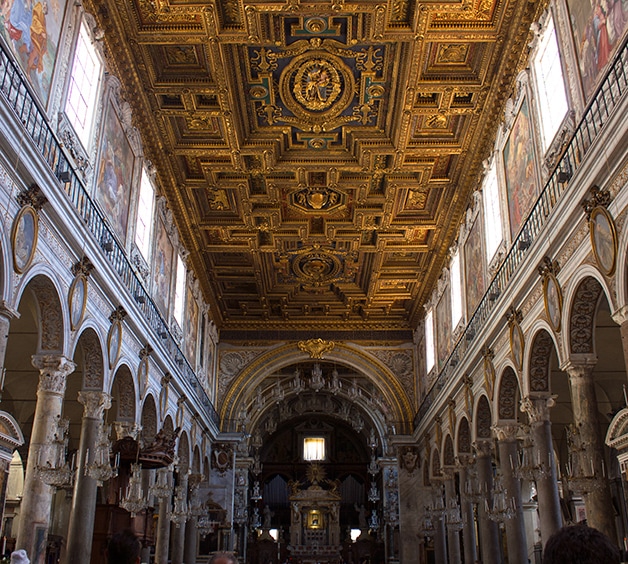 Aventine Hill – Specifically, you want to find the Keyhole, which is in a pretty unassuming-looking door up on the hill. You’ll know it by the crowd of people lined up in front of it to look through the hole, and the view is completely spectacular. The dome of St. Peter’s Basilica is smack dab in the center; I have no idea how a tiny keyhole could be situated so perfectly, but somehow it is! 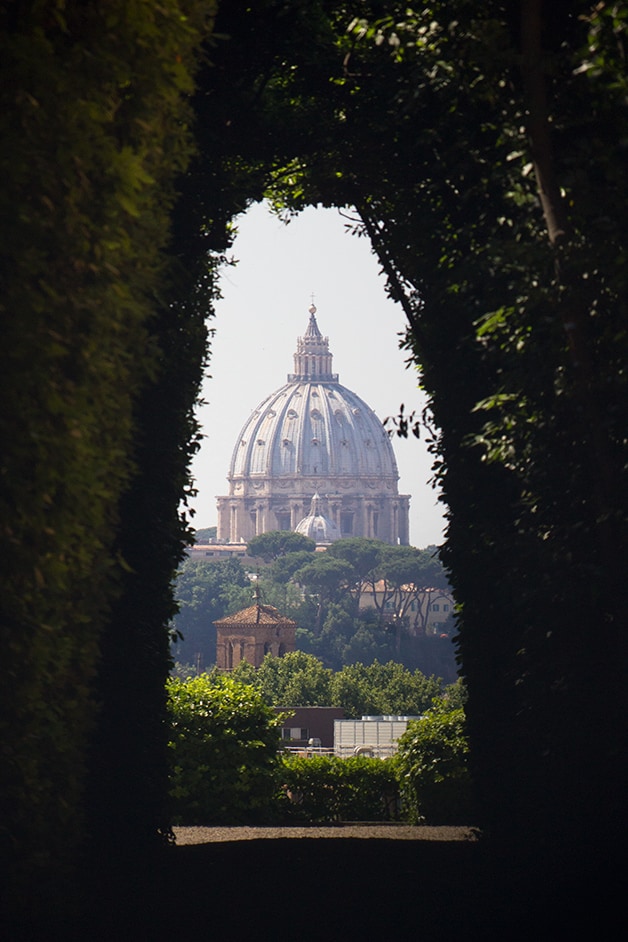 Castel Sant’Angelo – This was originally a mausoleum, then turned fortress, and I just found it to be such an interesting place to visit. It’s really worth it to take time and read about the history of the place as you walk through as well; generally speaking this isn’t one of my strong points, but I actually feel like it helped me appreciate the visit a lot more. 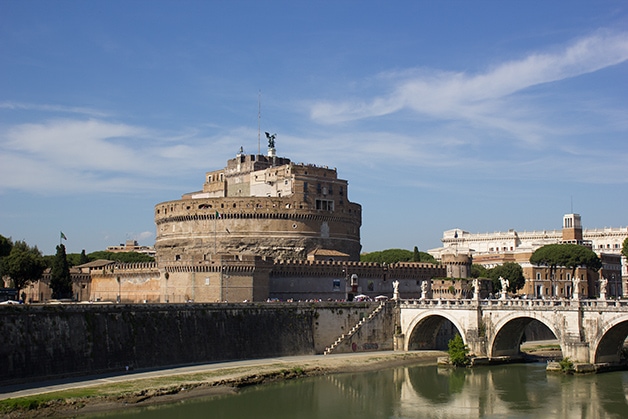 Le Domus Romane di Palazzo Valentini – Under Palazzo Valentini, you can walk through the excavations of a group of ancient Roman houses and learn a ton of interesting facts about the way of life back then. They’ve also created these multimedia projections throughout the space to give an image of what the homes once looked like, so it’s a pretty awesome (and really unique!) experience.

AND THE FOOD! (Italian food is THE BEST, honestly)…

Tazza d’Oro – COFFEE GRANITA – honestly the most unexpectedly amazing thing ever. Worth a trip just for that.

Panella – Wholemeal cakes (which are really more like scones if you ask me) that come in cherry, blueberry, and strawberry, plus their caffe latte freggo which is a godsend on hot days in Rome. There are also a TON of other tasty options here so it’s a great place to hit.

Antica Taverna – Grilled vegetable pizza and spinach salad with bacon. That pizza though – some of the best I’ve ever had.

Enoteca Barberini – Bruschetta (classic and smoked salmon are both amazing), Eggplant with cheese and radicchio (an appetizer), and gnocchi. Plus that huge chunk of fresh mozzarella on the gnocchi could sell me on its own. ;)

Angelino ai Fori dal 1947 – Bruschetta, eggplant parmesan, and smoked mozzarella and salmon pizza. This place is also right across from the Roman Forum and has a really cute outdoor patio.

Eataly – Fresh buffalo mozzarella (literally the best cheese I had in Italy right here), buffalo mozzarella and tomato pizza, and pasta (not sure which one we had, other than the fact that it had meat on it). They also have Venchi gelato here, which is pretty freakin’ amazing. I was obsessed with Eataly in NYC and became even more obsessed with it in Rome. If you’re a food lover/food nerd (*ahem* – me), it’s a must, must, MUST-go.

Cristalli di Zucchero – Macarons! I’ve had my share of macarons, but these were on another level – vanilla and chocolate raspberry both highly recommended!

Gelateria del Teatro – All the gelato, especially the chocolate varieties. Sonja and Alex over at A Couple Cooks recommended this place, and it was definitley one of my favorite gelato places in Italy. The selection of flavors is insanely creative and it was the hardest thing ever to just choose two. 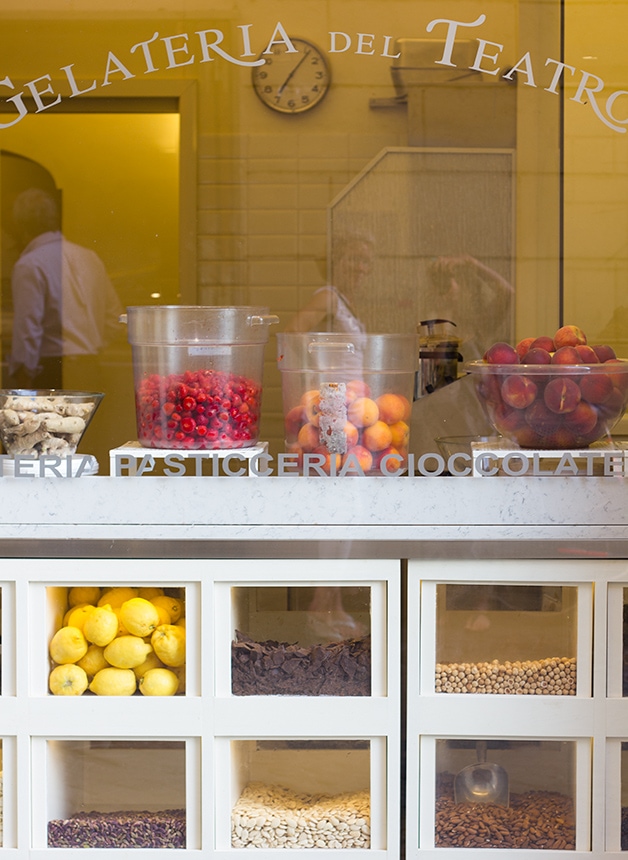 Hedera – Bachio (hazelnut) gelato! This place is also super cute and I love that they stick a little mini cone on top of your gelato (regardless of whether you order a cup or cone). 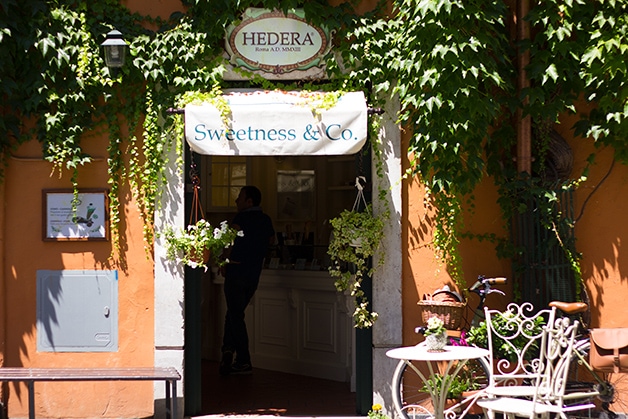 Ciuri ciuri – Coffee gelato. Rich flavor and extra creamy, plus their cones are pretty awesome. There’s also a lot of locations throughout Rome so it’s a pretty reliable place to get gelato no matter which area you’re in.

Venchi – Dark chocolate (cacao) and chocolate-hazelnut (cremino) gelato – they make awesome gelato that somehow manages to feel light and yet taste bold at the same time. Plus, their waffle cones mayyy be the best I had in Italy, and I do love my waffle cones.

Come Il Latte – Coffee gelato WITH a chocolate-filled waffle cone, a chocolate dipped waffle cookie, AND whipped cream. ← Seriously the most all-out gelato I had on the trip and –  *drumroll pleeeease* – my total favorite as well. I can’t even begin to explain how robust and creamy that coffee gelato was, and all the added touches just send it over the top. 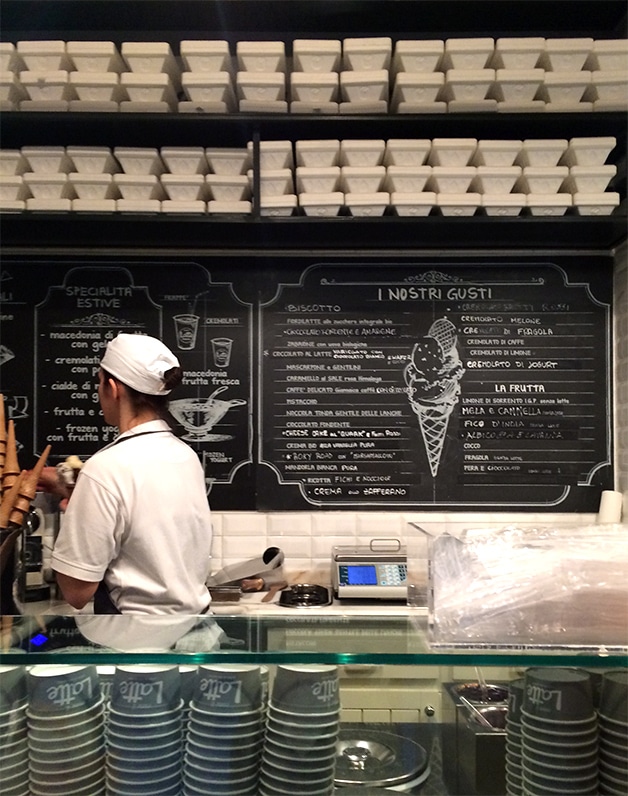 Annnnnd once again I’ve managed to write an exceedingly long and photo-bombed post, so I’m going to cut myself off for now. More to come soon! XOXO