It’s possible to be partial to a certain type of dough. I suppose any baker who has worked with a lot of dough in the past has one in particular that they favor over the rest. For me, that’s the dough that makes these two lovely loaves of Chocolate and Cinnamon Swirl Breads. 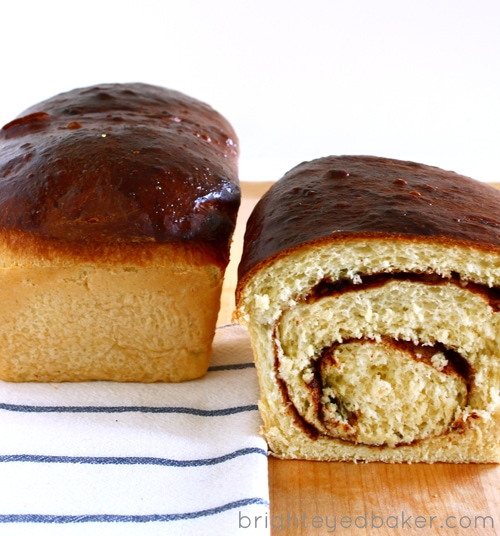 This is my second post in my miniseries of “Conquering Yeast”. Last week, I posted English Muffin Toasting Bread, which is probably one of the easiest-to-make yeast breads ever. This week, we’re making swirl bread. Now, you’re probably thinking, “What? This is supposed to be easy?” My answer is: yep! It takes some time to make, but the dough for this bread is so wonderful that making the bread is easy.

You know how they always say your dough should be soft, smooth, supple, elastic, etc.? This dough is the epitome of that. If you ever wondered what those words really meant, you’ll know as soon as you start putting this dough together. It kneads beautifully, feels like what all of those words say it should feel like, and rises just as expected. I should mention though, that this isn’t just my favorite dough pre-baking, it’s also my favorite dough post-baking, because it product the lightest, softest, most delicate bread imaginable. 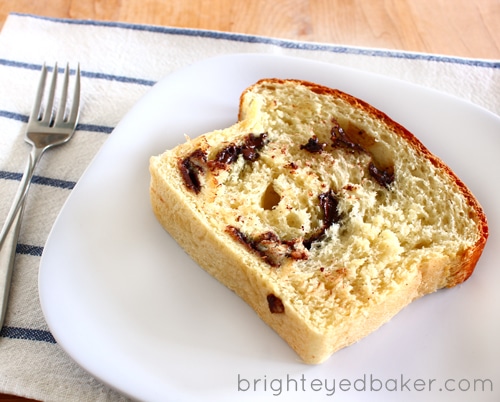 Another reason why this recipe is a winner, whether you’re just starting to work with yeast or are totally a pro at it, is because it doesn’t require any kitchen appliances (other than an oven, of course). I think I sometimes forget that great baking doesn’t necessitate a mixer, or a bread machine for that matter. That fact that you can make two gorgeous loaves of dough without any fancy gadgets is truly something worth taking a second to appreciate.

I adjusted this recipe to make two loaves because I always make it that way, one swirled with cinnamon sugar and the other with chocolate. The chocolate is like a chocolate babka (so delicious) and the cinnamon sugar is perfect for any cinnamon lover. Combined with the oh-so-perfect crumb, you get two loaves of bread that I’m sure will grace your kitchen table more than once! 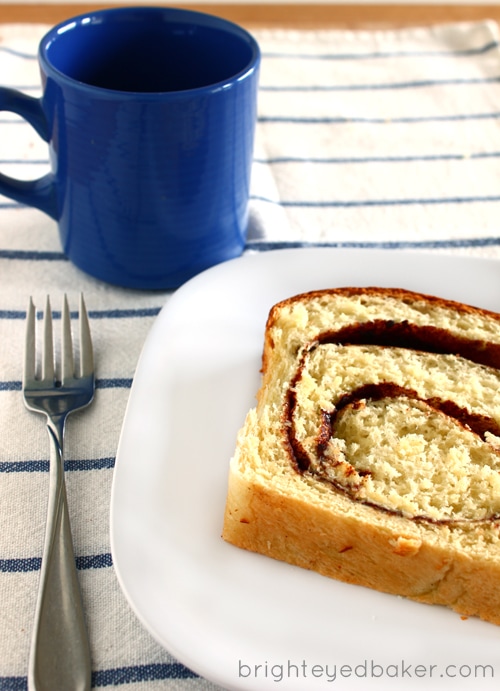 P.S. Mother’s Day is coming up this weekend, and it would of course be super sweet to whip something tasty up for the motherly figure in your life. It occurred to me that I didn’t have a dedicated post lined up for Mother’s Day, because what constitutes a Mother’s Day recipe, really? I thought about it, though, and realized that this recipe is perfect, because it’s one of my mom’s favorites, along with my Choco-Chip Cookies, of course. Plus, these swirl breads really are perfect for a relaxing Mother’s Day breakfast. So, this post is dedicated to my mom. Happy Mother’s Day to mom and every other mother out there! xo

The most amazing dough turns into the most beautiful loaves of bread, swirled with cinnamon-sugar and chocolate. This bread is proof that you don’t need any major tools to bake great bread.

*While the glaze gives the loaves that nice glossy and golden finish, I don’t love the flavor that it adds to the crust. I suggest either skipping the glaze, or sprinkling some sugar on top before baking, which should offset that darker flavor of the crust.